Corporate Philosophy and Message from Our President

Message from Our President 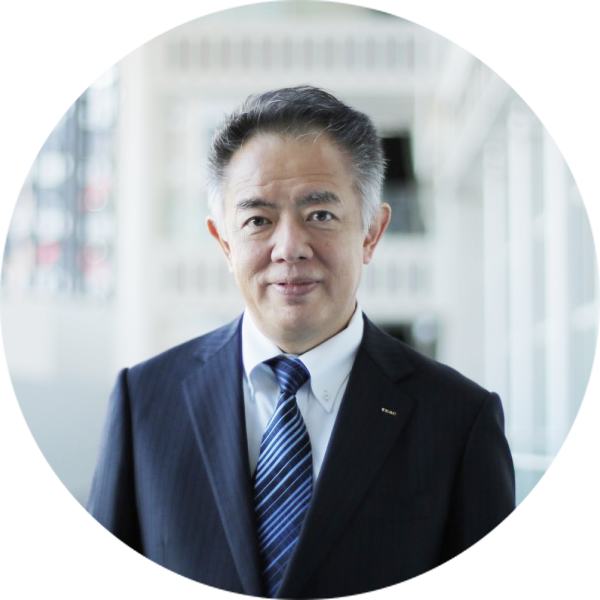 “Recording and Playback” are the very core of TEAC.
Capturing and Keeping the “Once Only.”

TEAC, described simply, is a company which offers the highest quality in the world of “Recording and Playback” to people and society. “Recording and Playback” becomes one story: accurately recording musicians' performances, then playing them back as they was originally performed. This sends the thoughts and intentions of musicians directly to the ears of the listener, and at the same time it gives musicians the ability to objectively assess their own performance.

Also, using some familiar examples, you can capture childrens’ musical performances or marriage ceremonies. If those events are vividly played back at a later time, you can say that recordings are important properties which revive memories of days past. In both the music field and the information field, there are many never-repeated-important moments in this world. We at TEAC passionately contribute to capturing and keeping this “Once Only”.

I started my career in TEAC in 1985. Looking back on those days I can say the fundamental corporate culture of TEAC continues to be “challenge and freedom”. For me, if I have to name one of the most familiar products of TEAC , then I would say that the TASCAM PORTASTUDIO first comes to mind. In fact, I was a regular user even before starting my career. Four track recording became available using every-day cassette tape. It was a very ambitious product, it became very popular amongst professionals and amateurs when it emerged in 1984. After I became a member of the company, I participated in the production of a multi-track recorder for professionals - the “DA-88,” which won an Emmy award in1995. In my second year, I was placed in charge of planning and producing the world's first “guitar amplifier simulator.”

I am very grateful, as I was cheeky when I was young and tended to say things like “this should be like that”, but others loved my passionate, youthful creativity. They listened to me and encourage me to take on new challenges. TEAC announced our medical image recorder in 1992, but medical devices were totally out of TEAC’s field at that time. I remember that even as an employee of the company I was astonished by the corporate culture of TEAC: “challenge and freedom”.

I became the president of the company in 2012. There were strong demands coming up from employees to me to do something concerning the production of a new type of data recorder. That type of product was reaching the peak in the market, but I decided to invest. It was a great success and received high evaluations from users. I am glad that the “challenging” corporate culture of TEAC continues. At the same time, I, as a president would like to give a bigger importance to challenges than others do, and also would like to be a person who can encourage others, like the pioneers at that time.

“Recording and Playback” enriches the world and the future.
Becoming Better Professionals.

There are various stakeholders in a company, and each of them has different demands. However, in the end the most important things are the products or services that make our customers’ lives richer.

As for TEAC, we want to fulfill customer expectations through “Recording and Playback,” and make a contribution to the world. Using the inheritance of culture and art as an example, I believe that recording impressive and precious performances and then handing these over to future generations is the ultimate mission of TEAC. Also, we have to continuously pursue personal richness such as enjoying beautiful fine arts vividly through playback technology. Moreover, if we can widen the scope of recording to support development and innovation in various fields, it would mean that we truly do contribute to society as a whole.

At TEAC, we aim to realize this vision and use it to become better professionals. For example, if there are 1000 clients, making all of them satisfied is not something we are good at. We would need to compromise and add a great number of unnecessary functions. On the contrary, TEAC would focus on the minority 100 users that cannot be satisfied with such products. So, we want to provide products which those minority users can say from their heart, “this is it!”

Time is going to change things more rapidly, I expect. TEAC has a foundation in “Recording and Playback”. On the other hand, we will keep ourselves sensitive to the world and keep our willingness to take on big challenges. Please expect a TEAC that changes and TEAC that never changes!

For your ears, for your eyes, repeating that moment.